The Subtle Art of the Name Drop

There’s no use trying to pigeonhole Humming House. You could call them a Bluegrass / Folk / Americana / Classical / Soul / Swing / Traditional Irish / Jazz / Rock band, but you’d still miss something fundamental. Their songs are undeniably original and yet seem immediately recognizable.

The frontman / fearless leader, Justin Wade Tam, is clearly ready to take take the audience on a wild ride, and you never know where it’s heading next. Their music features virtuoso instrumentation from Tam, Mike Butera, Joshua Wolak, and Ben Jones, with so many parts that you can never tell who’s going to be playing what.

All of this is driven by Tam’s vocals, which find a soulful, rich counterbalance in the vocals of Kristen Rogers (who is also a virtuoso banterist.) The whole enterprise is more about the freedom to make great music than about assigning roles. 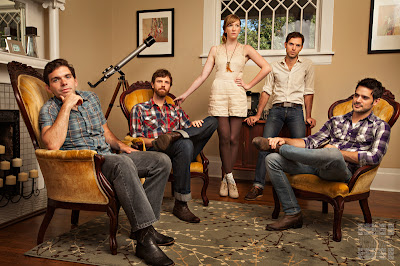 When I asked how this union of talents came about, Tam explained that the formation of the band happened in reverse: “I had written these songs, and was set to record them with Mitch Dane, who has worked with Jars of Clay, and Vance Powell, who has worked with The Raconteurs and Buddy Guy. We [the band] had played together before, but when we went in the studio, and Mitch and Vance heard it, we all decided that it worked so well and we knew we had to do the whole thing together.”
This kind of energetic collaboration is rare enough, but even more so given the breadth of backgrounds that each member brings to the table. As Jones explained, “We each came from different places, and each does something different. Like Kristen’s voice has a real soul sound, and it adds something unique.”

You can hear that clearly in songs like “Mrs. Wurley” where a line like, “Lay it down, oh, lay it down” changes the tone of the song instantly and smoothly. As Rogers added, “The songwriting is collaborative – we bring the different parts together, classical or maybe bluegrass elements, then someone will come up with a surprising twist and it changes the whole thing.” And they gain a lot of energy from this process, as Butera added, “Sometimes when we’ve found something new, it’s very exciting for us. We can’t get it out of our heads.”
Perhaps that’s a byproduct of good songwriting; the sense that these songs didn’t write themselves out of a trying to fit into a style, and that the band definitely isn’t interested in sounding like anyone else. They prove that strong lyrics and the creative use of instruments can make the style of the music seem like an afterthought.
Their lyrics often invoke images that tell a story and yet aren’t overly simple. Far from naïve, the sounds and lyrics celebrate the hues of life in full color. When I asked Tam about the lyrics to “Cold Chicago” for example, I got a surprising answer: “It’s about an old Parlor guitar I have. It’s been with me through a lot of traveling, and there was a point where I almost forgot I had it. The song talks about all the places it’s been, but how it still always wants to go back home.” Jones added, “They all sort of come from us, are tied to us, in a way, even if they seem to be stories about something else.”
There is a seriousness that is apparent in their commitment to making good music and to following the creative process through to the end. However, you can’t miss the 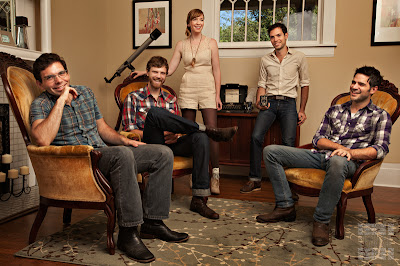 fact that they genuinely enjoy one another’s company. Laughing and joking around is a part of the process, and it comes through in their sound. This energy and intensity is nowhere more apparent than at one of their live performances.

With songs that are often joyous, celebratory, and lively, their live

shows are just plain fun. As Tam put it, “Before shows we always say ‘Let’s throw a party.’” We take songwriting very seriously, but it has to be fun.” Their shows are the musical equivalent of throwing in the kitchen sink, including upright bass, fiddle, guitar, mandolin, even ukulele and some of the best dang tambourine-ing ever. There’s never a dull moment. Just try to hear them play “Gypsy Django” and not sing along, “Oh now.”
Naturally, doing a live album made sense. Tam explained how the idea and a little bit of good luck met for the creation of Live at The Red Clay Theatre: “We had talked about doing a live album because we knew how important the live show was to our sound.”
Rogers added, “We played the show at the Red Clay Theatre in Georgia, and their brilliant sound guy captured the audio. He recorded it through the sound-board, which is really difficult, but he did it perfectly.” You can actually hear the energy and a bit of foot-stomping. And for a Humming House show, that’s about right.
Humming House is:
Justin Wade Tam
Kristen Rogers
Joshua Wolak
Ben Jones
Mike Butera
This is a band to watch. Even with their breadth of experience, you can still tell this is only the tip of the iceberg for them.