Connect
To Top
Be InformedOctober 5, 2017

Beauty Is, Apparently, in the Eye of Your Boss 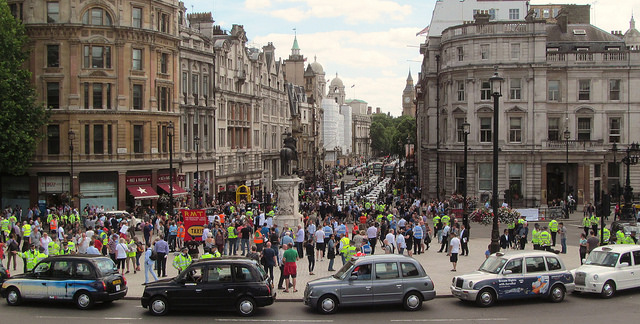 A female Uber driver in London has issued sex discrimination proceedings against the company, arguing that women working for Uber are disadvantaged and that the company isn’t moving to make amends.

The 44-year-old woman, who asked to remain anonymous, is being represented by the law firm Leigh Day. The woman is arguing that Uber’s policies and method of operation are putting women drivers at risk.

She thinks that drivers for Uber should know the passenger’s destination location before they are forced to agree to pick them up. She also explains policies that work against female drivers, such as the way a driver can’t cancel the journey mid-way if a passenger becomes aggressive. Even more, asking a customer to leave the vehicle could hurt one’s profits due to low ratings and complaints.

This isn’t the first time Uber has had issues protecting its drivers’ safety. Many Uber drivers have actually begun filming their rides with a dashcam to protect them against unruly customers. One of these unruly customers ended up being Uber’s CEO, Travis Kalanick, who was recorded by a dashcam in February during a ride. The Uber driver present claimed the CEO’s decision-making had forced him to declare bankruptcy.

GMB, the labor union bringing the case, believes drivers should be able to challenge complaints and low ratings.

“Once again we have a member with serious concerns about Uber’s systems and practices, which place the basic safety needs of the worker as secondary to the imposition of a rigid and purely profit-based model,” said Maria Ludkin, the union’s legal director.

“We look forward to allowing the courts to examine whether this aspect of their model discriminates against women drivers.”

Nigel Mackay, a lawyer representing the driver, stated that his client no longer felt safe driving at night and suffered a loss of income as a result.

“We believe that Uber should not only ensure the safety of its passengers but also all of its drivers, and provide as much protection as possible to women to ensure that they are not vulnerable to assaults from passengers.”

Uber is also involved in other legal battles. Transport for London recently revoked the company’s license to operate in the city. They stated that “Uber’s approach and conduct demonstrate a lack of corporate responsibility in relation to a number of issues which have potential public safety and security implications.”

The company has recently confirmed it will be appealing the decision, as it separately seeks to overturn a landmark ruling that orders it to give its drivers basic employee rights.

Uber has about 40,000 drivers in London and an estimated 3.5 million customers.

Commenting on accusations that women are less safe driving for Uber, a spokesperson said that drivers “can choose which trips they want to take, or cancel, without any penalty.”

“If a driver doesn’t want to go to a particular area there is no obligations for them to do so. Drivers can also set a preferred destination in the app and Uber will only allocate bookings heading that way.”

This isn’t the first time Uber has had problems concerning gender equality. Former Uber board member David Bonderman interrupted Arianna Huffington during a board meeting intended to address allegations of sexual discrimination to say that more women board members would just lead to more talking. He later resigned.

Hopefully, Uber – and other transportation services – will listen to these concerns and implement better policies that will protect its drivers.